RYOT news tells you what’s happening in the world and what you can do about it. It’s the first and only breaking news site where every story lets you take action from signing petitions to donating and volunteering, RYOT news empowers you to actually BECOME the news.

News + Action = RYOT and it also equals my new favorite news source in the world. S#@t just got real.

Buy Nothing Day is an international day of protest against consumerism celebrated annually just after Thanksgiving.

Skip Black Friday and celebrate Buy Nothing Day with us all Here.

Happy Buy Nothing Day everybody!!!

And now for a song to kick off this celebration…

The University of Southern California School of Social Work invites you to participate in You Matter, a grassroots campaign designed to foster well-being and bring back some much-needed human connection. Use our Care Cards to tell someone why they matter to you.

The purpose of a Care Card is to serve as a random act of kindness — a message of love, friendship or appreciation. The You Matter campaign encourages human connection and is a reminder that we’re all in this life together. You never know what someone may be going through, and simply checking in can have a huge impact on that person’s well-being. Take a moment to tell someone, “You Matter,” by downloading a Care Card today!

Not sure how to get started? Download a You Matter Care Card and read their post on 60 Ways to Use a Care Card for inspiration.

They say, if walls could talk…I’m actually not really sure what goes after that, but now they technically can with Neighborhood Remarks.

The project was started as a way for communities to have conversations about how their neighborhoods are changing for better or for worse by placing the stickers in public view in order to engage passerbyers.

UNICEF Tap Project is working to help the 768 million people around the world without access to clean water. This year you can help by taking a challenge to give up access to something far less vital than water–your cell phone.

For every 10 minutes you don’t touch your phone, Giorgio Armani Fragrances and other generous donors can fund one day of clean water for a child in need.*

Not touching my cellphone = clean water for a child in need! My cell phone is dead to me.

This Is A Good Sign is a movement founded by Eric Dennis in which his aim is to simply spread happiness and make people feel better by simply sharing his signs of hope (as seen above) all over the world.

Get your free sign here and join the movement with us! 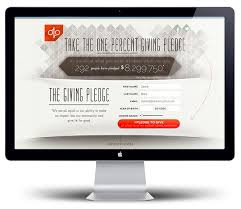 The 1% Giving Pledge (by One Percent Foundation) is a public commitment to give at least 1% of your income to philanthropy. In other words it’s only $1 out of every $100, you can’t afford not to do this one people!

TakePart has a new petition on their site about raising minimum wage, here’s what they have to say:

The annual income of a full-time employee working at the federal minimum wage is$15,080. These individuals live $3,000 under the poverty level and struggle to meet basic needs.

Today, 17 million children have a parent who works for minimum wage. The Fair Minimum Wage Act of 2013 could have a dramatic impact on fighting poverty and hunger.

Well I know where I stand on this one. Sign the Petition.

Donate A Photo is Johnson & Johnson’s new app that turns your photos into good deeds.

You can donate one photo a day, every day and for every photo you share Johnson & Johnson will donate $1 to a cause you choose to help, like fixing up a public park, getting medicine for an infant or helping kids play sports safely.

You can get the app on Google Play Store or The App store for free.